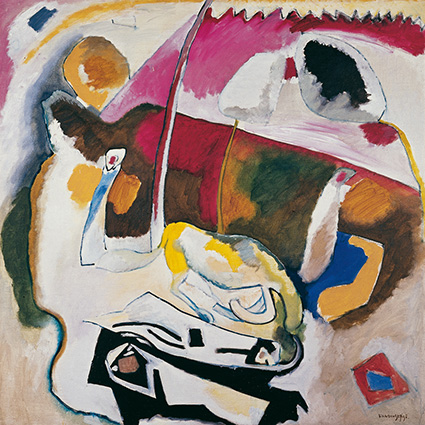 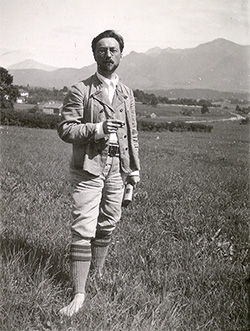 "Please do not believe that my paintings seek to reveal 'secrets' before your eyes, that I have invented a special 'language' that must be 'learned' [...]. My 'secret' exclusively consists in that I acquired the fortunate ability to free myself from 'ambient noise' a number of years ago [...]."

As a painter and theoretician, Wassily Kandinsky made a decisive contribution to bidding farewell to objects in the traditional sense. He is one of the pioneers of art in the past century.

Kandinsky (1866-1944) grew up in a family that was financially secure and in a political atmosphere that was relatively liberal for the Tsarist Russia of the 19th century. Kandinsky began drawing and painting at an early age, but he did not start experimenting with watercolors and oil paint until much later. Kandinsky began studying national economics and law at the age of 19. After successfully completely his studies and teaching, he was offered a full professorship at another university but instead he decided to work at a print shop in 1895.

In 1896, he moved to Munich in order to study art and pursue a career as a painter. Then, in 1901, Kandinsky became one of the founding members of Phalanx, an association of artists that became known for its exhibits of Impressionist, Neoimpressionist and Art Nouveau painting. Kandinsky taught at the school for painting that was also affiliated with this group. It was here that he met Gabriele Münter, who was to become his disciple and later his life companion. However, the acceptance of the artists' association in conservative Munich faded quickly. The following years were marked by restlessness: Kandinsky and Münter travelled together extensively through Europe and North Africa until they settled in the house that Gabriele Münter had bought in Murnau a. Staffelsee in 1909. There, Kandinsky and Münter maintained friendships with other artists such as Alexej Jawlensky and Marianne von Werefkin. With the New Artists' Association of Munich founded in 1909, their outlook broadened and the desire for new forms of imagery intensified. This is a development that Kandinsky portrayed in his work on art history titled "Über das Geistige in der Kunst" ("The Art of Spiritual Harmony" [translated by J.H. Sadler, Constable & Co. Ltd., London and Boston] or "On the Spiritual in Art" [translated by Hilla Rebay, The S.R. Guggenheim-Foundation, New York, 1946]) (1911) and in the "The Blue Rider" Almanac (1912) that he published together with Franz Marc.

The outbreak of World War I resulted in severe censorship for Kandinsky. He left Germany and returned to his home country. There, he met Nina von Andreewsky who he married the following year. The couple moved to Weimar in 1922, then later to Dessau where he taught at the Bauhaus art school. In 1930, Kandinsky had to leave Germany once again and spent the rest of his life in Neuilly-sur-Seine near Paris where he died in 1944.