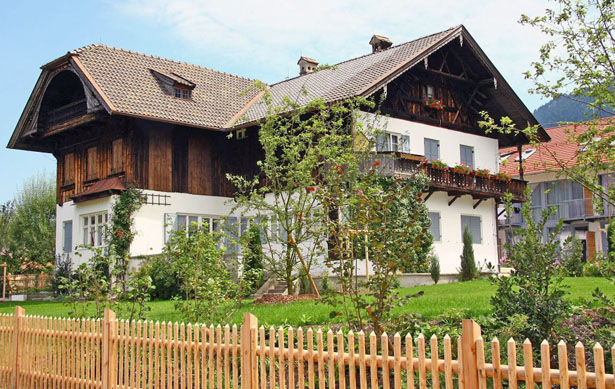 In the Kaulbach Villa, you can admire works by Friedrich August von Kaulbach (1850-1920), a member of the Painter Prince (Secession) association of Munich, not to mention his studio. He used the estate in Ohlstadt as his summer home from 1893 to 1910 and later settled here when he retired. Today the house consists of the original rooms as well as a small museum dedicated to the history of the small village. The village museum has traditionally furnished parlours and living quarters on the ground floor of the villa, along with old tools and other articles from handicrafts and trade, as well as old documents preserved in photographs and on postcards.

While the villa was indeed always a cultural venue, it was also an important place for the Kaulbach family. Friedrich August wasn't the only painter in the family: he was later joined by Max Beckmann as husband of Kaulbach's daughter Mathilde. Kaulbach himself studied at the royal school of arts and crafts in Nuremberg and later under his father. In 1871, he moved to Munich and, along with Franz von Lenbach and Franz von Stuck, became a member of the association known as the Munich Secession or the Munich Painter Princes. His portraits were predominantly commissioned paintings which almost exclusively portrayed members of the highest echelons of German and American society. Charging up to 90,000 gold marks for one of his works – which were typically in the Neo-renaissance style, so popular at that time – he was able to live a life of luxury. In addition to the stately palace in the city of Munich, the passionate hunter built a summer home with a studio, garden pavilion, bowling lane and swimming pool in Ohlstadt in 1893 – the Kaulbach Villa. Here he entertained prominent guests like Prince Regent Luitpold and the famous regional author, Ludwig Ganghofer.

Friedrich August von Kaulbach was no longer living when his youngest daughter, Mathilde von Kaulbach, met the painter, Max Beckmann, in 1924, whom she later married. Max and Mathilde Beckmann stayed several times at the villa in Ohlstadt – including in 1931, 1933, 1934 and 1935 – where Kaulbach's widow, Frida von Kaulbach, lived after the death of her husband. On these occasions, Beckmann would use his father-in-law's studio. Here, he created works of art such as "Moonscape in the mountains with snow", "Garden landscape in the spring", "View from the pavilion" and the "Self-portrait in a large mirror with a candle". Even though Friedrich August von Kaulbach and his son-in-law Max Beckmann were separated by an entire generation of artists and, despite the fact that their styles of painting and view of art were fundamentally different, there remain some interesting parallels between them. Both painted many self-portraits, portraits of members of the family and high society. Today, the artist's studio contains about 50 pieces by Kaulbach as well as works by Franz von Lenbach and Olaf Gulbransson.