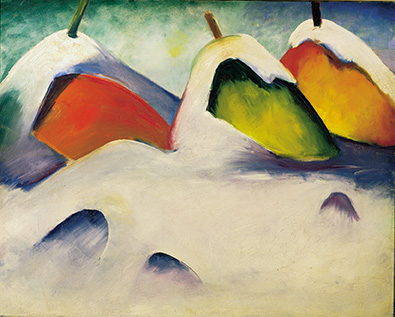 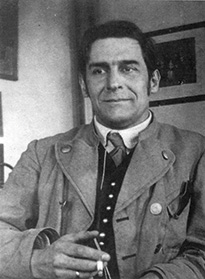 "I am trying to intensify my feeling for the organic rhythm of all things, to achieve pantheistic empathy with the throbbing and flowing of nature's bloodstream in trees, in animals, in the air [...]. I see no means better suited for the 'animalisation' of art than the image of an animal."

Marc's stylised world of animals does not seek the external, but rather the internal, to draw its nature. To paint animals the way they feel, not the way humans view them, that was his goal. When doing this, he increasingly moved towards abstract painting, but did not depart from figurative painting.

Franz Marc was born in Munich in 1880. There, he began studies in philology and theology in 1899. Just one year later, he studied at the Munich Academy of Fine Arts, under Gabriel von Hackl and Wilhelm von Diez. When Marc travelled to Paris in 1903, he was impressed by the painters of the Impressionist movement, but also by Toulouse-Lautrec, Pierre Bonnard, Edouard Vuillard and Vincent van Gogh. After his return, the artist especially focussed on pictures of animals: simplified and stylised. He tried to captivate the souls of these beings on canvas.

In the New Artists' Association of Munich (NKVM), which he joined in 1911, he found other like-minded artists. He drew the attention of the painter, August Macke, as a result of an exhibit of his works of art in Brakl's Modern Art Shop in Munich. Together with Bernhard Koehler sen., Macke visited the artist who was then living in the village of Sindelsdorf. Koehler sen. was so enthused by Marc's skill that he ended up becoming a patron of Marc's. Due to his preemptive right for all future works of art, Marc was financially secure and thus able to focus his attention on his artistic work. Among other things, he took part in the second exhibit of the NKVM (1910), which received hostile criticism. After that, Franz Marc wrote an enthusiastic review of the exhibit, upon which he was accepted as a member of the group of artists around Wassily Kandinsky. It was the encounter with Kandinsky that encouraged him to concentrate even more intensively on the symbolic force of colour along with its laws and effects.

When one of Kandinsky's pictures for the third exhibit of the NKVM was later rejected, Marc and Kandinsky withdrew from the group in 1911 and formed a loose group of artists: the Blue Rider group. In the autumn of 1911, they prepared the "The Blue Rider" Almanac in what is known as the Münter House. The first exhibit of the "The Blue Rider" editorial team took place to this end in Heinrich Tannhauser's art gallery in 1911. The Almanac was then published by Piper-Verlag in 1912. That same year, August Macke and Franz Marc again travelled to Paris where they visited Robert Delaunay, whose futuristic style of painting inspired them. After that, Marc's paintings increasingly made use of abstraction. However, he never fully departed from his figurative animal symbolism.

When World War I broke out Marc volunteered for military service. He went to war, neither full of enthusiasm, nor overcome by a feeling of elevation. Moreover, like countless other contemporary artists and intellectuals, he was convinced to experience a sort of "cleansing" in the war. He recognised his mistake too late and fell near Verdun in 1916. Pre-studies for abstract paintings which, however, Franz Marc was no longer able to produce, were found in his book of sketches from the war field.