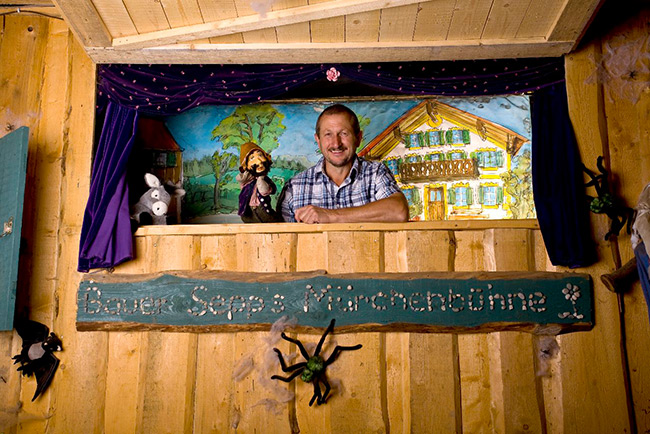 Bauer Sepp, that is Josef Taffertshofer: a farmer and a teller of fairy tales. He himself penned all of the endearing stories and plays that he presents on the fairy tale stage on his farm, the Blaslhof. They are about courage, adventure, love and shelteredness – motifs that children love.

Even though the fairy tale stage is directed by Sepp Taffersthofer, it is a family project: While Farmer Sepp tells about the adventures of his small heroes, his wife Claudia, daughter Barbara, sister Lisbeth and cousins make the puppets come to life. The puppets and the changing stage settings were created with loving care by artist Christina Dichtl.

Farmer Sepp's fairy tale stage (Bauer Sepps Märchenbühne) is an unforgettable experience, both for young and old – it has been awarded the innovation prize of the Bavarian farmers' association. In addition to the regular performances, children can also experience this fairy tale as a special performance on the Baslhof farm during a kindergarten or school field trip or in their own kindergarten or classroom.

Father of five, author of fairy tales, theatre actor and a horse lover – Sepp Tafertshofer is truly multi-talented. However, his passion for children's books and puppet theatre didn't come until later in life, after he experienced setbacks, but also due to his personal conviction. It was in the early 1990s that he took the decision to radically change his parents' 250-year-old farm and give up the associated dairy business.

At that time the government paid premiums to have the calves put to sleep in the first weeks of their lives and to have their corpses disposed of. Not only did Sepp Taffertshofer find this inhumane. It also became the reason for transforming his flourishing dairy business into an equestrian business and horse boarding stables. It was private tragedies, too, though, such as the death of his daughter after an accident, that changed his perspective.

He began writing children's books and then putting them on stage on his own farm in 2001. With humour, courage, and improvisation, he succeeded in gaining a reputation as a teller of fairy tales in the Blue Land and far beyond the borders of Upper Bavaria: with the Blaslhof publishing company, which he founded himself, and by participation in numerous storytelling competitions.

You can also find information on the performances, dates and the program on the website of Bauer Sepp's Fairy Tale Stage.